The green bond market has seen exponential growth. It reached its most substantial milestone yet, with USD 1 trillion in cumulative issuance since market inception in 2007. The milestone was passed in early December 2020. You can see the updated cummulative totals on the Green Bond Market on our market widget on the homepage.

In the 13 years since market inception we have calculated the average annual growth rate at approximately 95%.

The very first green bond was issued in 2007 with the AAA-rated issuance from multilateral institutions European Investment Bank (EIB) and World Bank. The market starting to kick off in 2014 and since then each year has closed at record all time highs.

The wider bond market started to react after the first USD1bn green bond, which sold within an hour of issue, by IFC in March 2013.  The November of 2013 there was a turning point in the market as the first corporate green bond issued by Vasakronan, a Swedish property company. Large corporate issuers include SNCF, Berlin Hyp, Apple, Engie, ICBC, and Credit Agricole.

The first green muni bond was issued by Massachusetts in June 2013. Gothenburg issued the first Green City bond in October 2013. US states are major green bond issuers, but issuers also include Province of Ontario, City of Johannesburg, and Province of la Rioja (Argentina). Local government green bonds continue to grow.

By the end of 2015, the cumulative USD100bn mark had been reached with growth accelerating towards the trillion mark in the five years since. The milestone of USD100bn in annual issuance came to pass in November 2017 during COP23 in Bonn, providing a boost in market perception that green bonds were becoming a mainstream product and vital contributor to climate finance and reaching Paris Accord objectives.

An encouraging characteristic of the green finance market has been the remarkable growth of green debt instruments including green loans and sukuk. Green instruments have orignated from a record sixty seven nations and multiple supranational institutions. 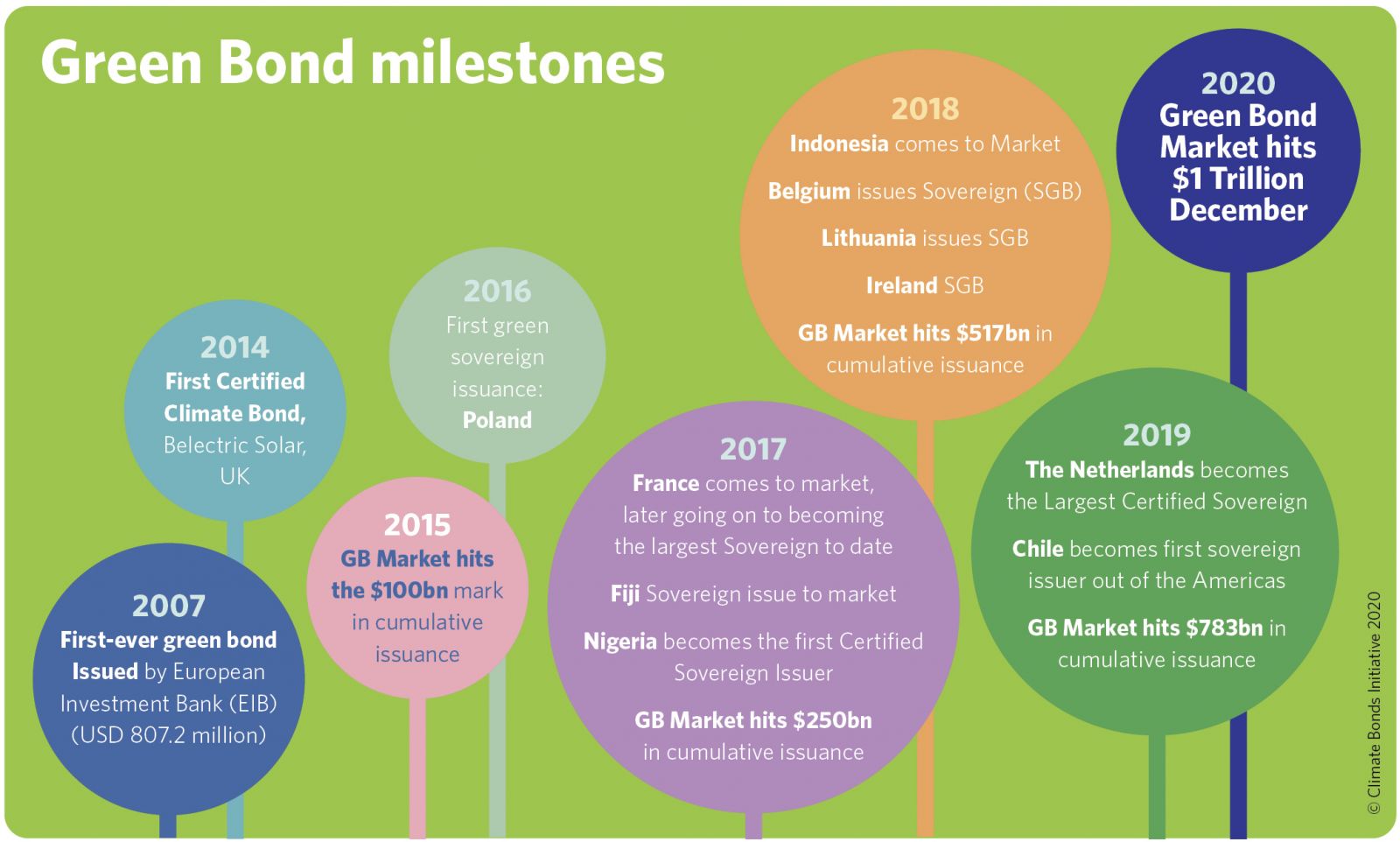 Green bonds were created to fund projects that have positive environmental and/or climate benefits. The majority of the green bonds issued are green “use of proceeds” or asset-linked bonds. Proceeds from these bonds are earmarked for green projects but are backed by the issuer’s entire balance sheet. There have also been green "use of proceeds" revenue bonds, green project bonds and green securitised bonds.

Green bonds have some additional transaction cost because issuers must track, monitor and report on use of proceeds. However, many issuers, especially repeat green bond issuers, offset this initial cost with the following benefits:

Green Bonds are standard bonds with a bonus "green" feature

The green “use of proceeds” bond market has developed around the idea of flat pricing - where the bond price is the same as ordinary bonds. Prices are flat because the credit profile of green bonds is the same as other vanilla bonds from the same issuer. Therefore, green bonds are pari pasu to vanilla issuance.